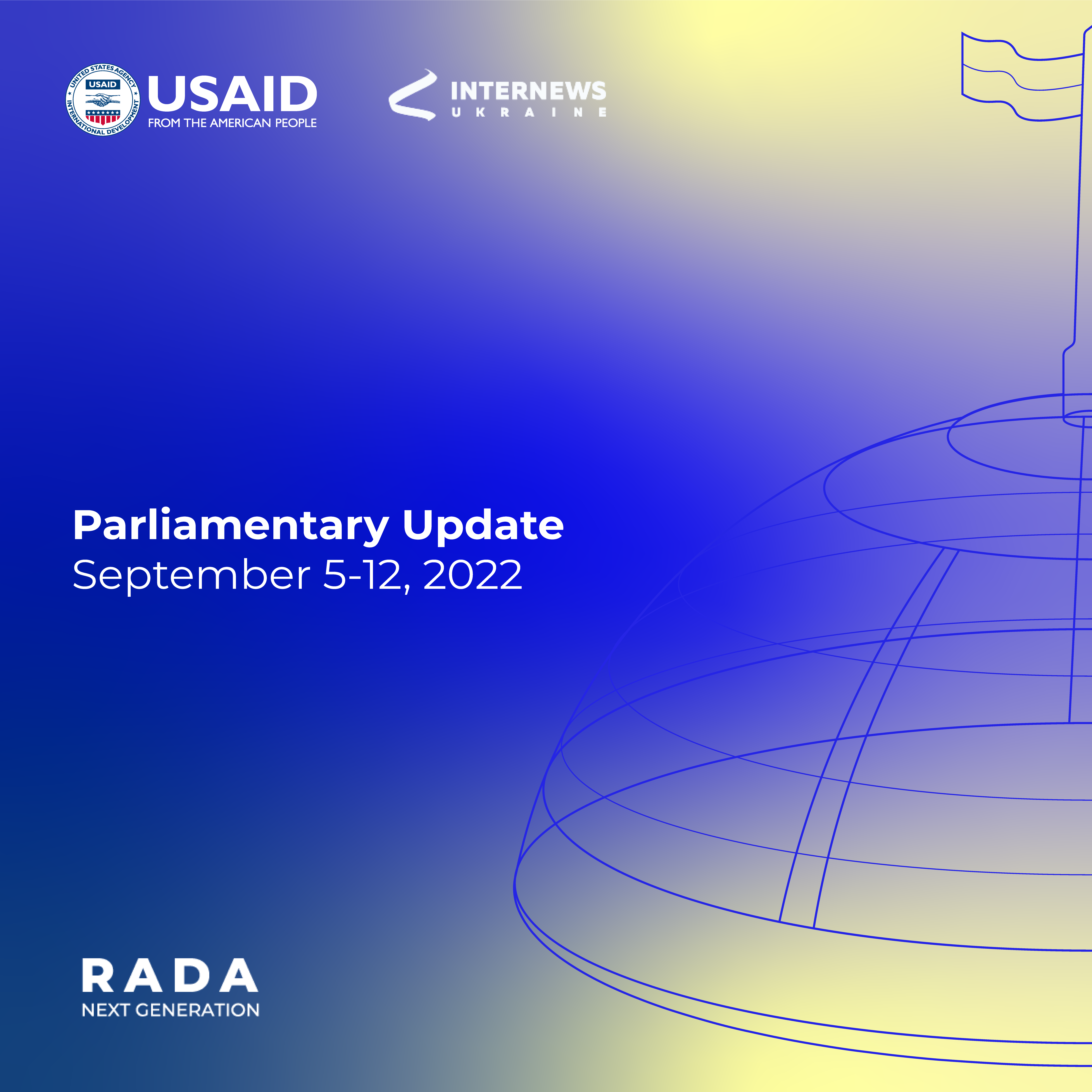 Ukraine’s Parliament approved several laws and resolutions at the plenary meetings on September 6-7.

The Verkhovna Rada of Ukraine:

Among the adopted resolutions were the following:

Several draft laws were also passed in the first reading, namely those on:

According to the Chesno movement, which deals with political parties and their transparency, at the hearing on September 6, the Supreme Court rejected the appeal and upheld the decision of the first instance court.

For 26 weeks, USAID RADA: Next Generation Program has been assisting Ukraine’s Parliament in its external communication within the Communication Task Force of the VRU Secretariat,

mainly through narrative development and info production for social media, both in English and Ukraine daily.

Verkhovna Rada Secretariat learned about the work of the US parliamentary institutions and established cooperation with their American counterparts during a study trip organized by USAID RADA: Next Generation.

The visit launched a new stage of cooperation between the two parliaments regarding research services’ operation.

The visit organized by RANG made it possible for VRU to start negotiating the memorandum’s signature with the House Democracy Partnership, which would refer to joint visitors events, trainings, study visits and professional exchanges.

Program experts continued to support the activities of a working group on parliamentary reform and assisted with the Code of Ethics and coalition-opposition interaction.

On September 8, Program's experts participated in the meeting of the working group's unit dealing with the issues of the coalition-opposition interaction. The participants continued to discuss proposals for improving relations between the coalition and the opposition.

Program agreed on the plan to educate MPs and parliamentary staff about the principles of European integration for the implementation of Ukraine’s roadmap towards EU membership.

On September 7, RANG held a meeting with the Ugis Sics, Leader of the project "Support to comprehensive public administration reform in Ukraine" (EU4PAR), and Mykhailo Latynskyy, Advisor to Mr. Ruslan Stefanchuk on EU integration. The participants of the meeting discussed joint activities on the preparation of training on European integration for the MPs and newly established parliamentary subcommittees on EU integration. After September 15 the list of participants for training will be formed, and A4U and RANG will develop the specifics of the training sessions. Furthermore, meeting attendees discussed the possibility of developing a video course on EU integration for Ukraine's Parliament.

Program assisted the MP’s team in identifying local issues while arranging information-consultative hubs to engage with voters in the Chernihiv region.

On September 8-9, Program conducted a strategic session in the frames of the Information-consultative hub in the Chernihiv region for teams of MPs Serhii Hryvko and Valerii Zub, Servant of the People faction. The purpose of the session was to conduct a SWOT analysis, identify current problems, prioritize them, and develop a Roadmap of activities in the constituencies for MPs and their teams amid martial law. As a result, a draft Roadmap with a list of pre-defined activities was created. RANG will continue to support the MPs' teams in finalizing and implementing the document.

On September 15, 3 pm, the Program will organize an online meeting with the Parliamentary Institute, Czech Republic,

on the role of parliament in the EU integration processes. The meeting will be available via the link: bit.ly/3S127BX.

On September 23, 3 pm, the Program will organize the presentation of the research on Law Drafting Offices

conducted by the Westminster Foundation for Democracy for the members of the VRU staff dealing with legal issues (law department, VRU leadership).