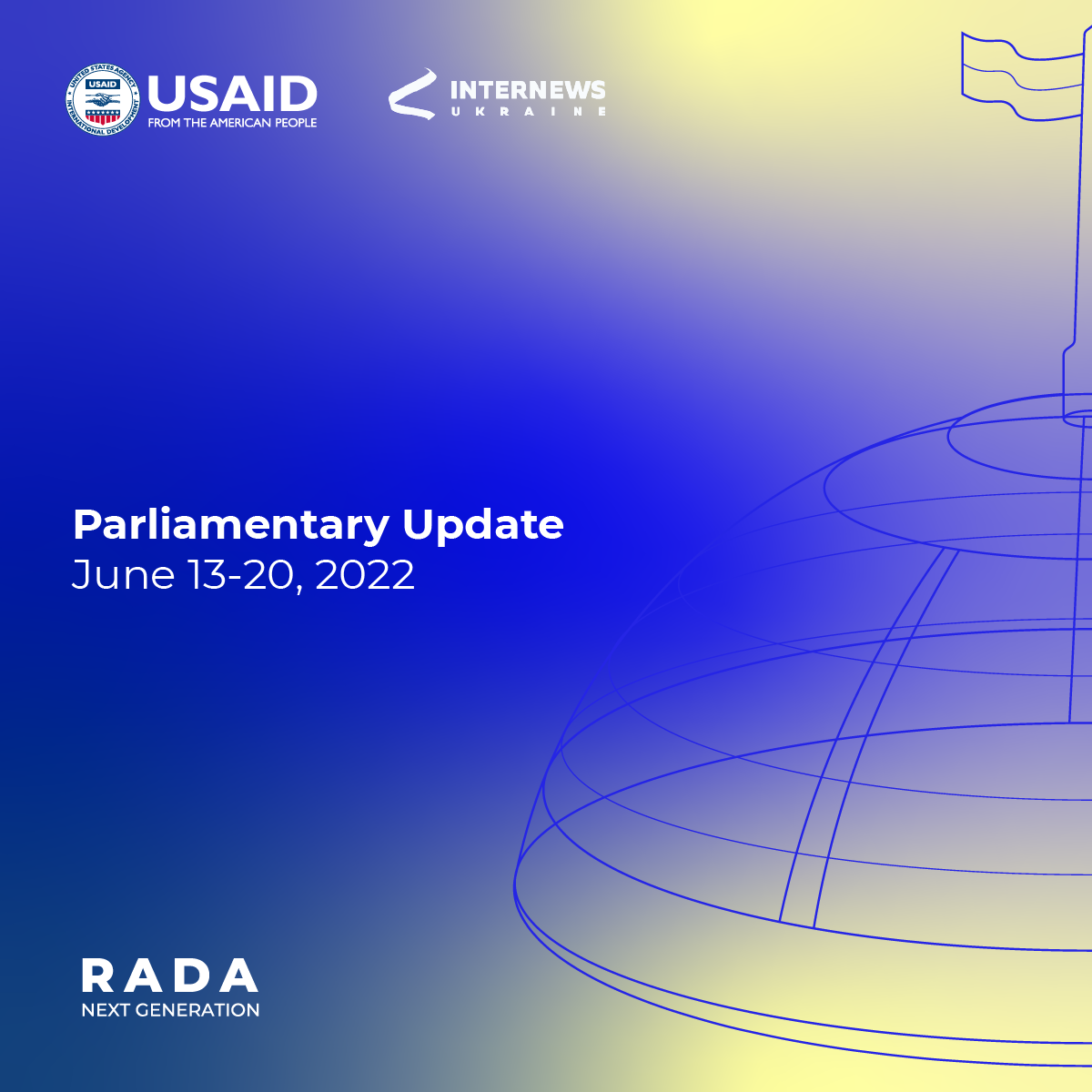 Nashi and Shariy political parties are officially banned in Ukraine.

On June 14, the administrative court of appeal in Lviv banned the Nashi ("Наші") political party, headed by ex-MP Yevhen Muraev. As reported by the CHESNO Movement, the court ruled that the funds and other assets of the party, its regional, city, district organizations, primary branches, and other structural entities should be transferred to the state. On June 16, the same court banned the Shariy party with the same conditions regarding the assets.

VRU's Committee on Integration of Ukraine to the EU recommends the Verkhovna Rada address EU member states and EU institutions in support of Ukraine's candidate status.

On June 17, VRU's Committee on Integration of Ukraine to the EU recommended Ukraine's Parliament adopt the address of the Verkhovna Rada of Ukraine to the member states of the European Union and the EU Institutions in support of granting Ukraine the status of EU candidate country (resolution no. 7471). The above-mentioned address calls for "supporting Ukraine's aspirations to recognize its European perspective by granting Ukraine the status of a candidate country for accession to the EU at the European Council of 23-24 June 2022 under Article 49 of the Treaty on European Union.

The Verkhovna Rada of Ukraine held its plenary meeting and adopted several laws.

On June 19, Ukraine's Parliament addressed EU member states (resolution no. 7471), calling for granting Ukraine EU candidate status at the European Council's meeting on June 23-24, 2022. Ukraine's lawmakers also addressed the UN Human Rights Committee, the UN Committee on the Rights of the Child, the International Court of Justice, and the UN High Commissioner for Refugees with a call to deal with illegal deportation and adoption in russian families of the Ukrainian children kidnapped by russia (resolution no. 7450). Finally, foreign governments were called to denounce double taxation agreements with russian (Resolution no. 7430).

The Parliament denounced several treaties with the russian federation and ratified amendments to the treaty on strategic partnership with the United Kingdom.Moreover, the Verkhovna Rada adopted a number of laws. They regulate certain aspects of the educational process (laws nos. 7293 and 7325), activities of the Ukrainian Culture Fund (law no.7417), and simplified the establishment of legal facts (law no. 7310) under martial law. Military pensioners were allowed to choose any bank account for receiving their pensions (Law no. 7337), and military personnel involved in hostilities were exempted from the special war tax (law 7432). In the cultural sphere, the Parliament provided subsidies to the Ukrainian book publishers (law no. 6287), at the same time banning publications imported from russia and belarus (Law no. 7459) and public performance of music of the russian origin (Law no. 7273-д). The Parliament also postponed the introduction of an electronic complaints system in the sphere of public procurement (Law no. 7328) and imposed obligatory requirements to organize bomb shelters in newly constructed buildings (Law no. 7398).

For 14 weeks, USAID RADA: Next Generation Program has been assisting Ukraine’s Parliament in its external communication within the Communication Task Force of the VRU Secretariat,

mainly through narrative development and info production for social media, both in English and Ukraine daily. The program’s team disseminated two issues of the information digest “Parliaments on the Frontline,” including the English language version and the Ukrainian one. English-language digest “Parliaments on the Frontline” has been sent to 18 900 members of foreign parliaments. The Program assisted MPs in arranging information-consultative hubs to engage with voters. USAID RADA: Next Generation Program addressed MPs with a proposal to introduce information-consultative hubs within their constituencies/ regions as a platform to support and strengthen MPs-constituents communication to improve communication with voters under martial law conditions. The Program cooperates with the first group of 20 MPs from 10 regions all over Ukraine in conducting strategic sessions for MPs, their teams, and stakeholders, namely business representatives, local authorities, NGOs to identify problems in their constituencies and prioritize them to develop a roadmap for MPs’ activities under martial law. In the future, Program will support in implementing the roadmaps, through collaboration with other projects and programs of international technical assistance.

On June 15-17, USAID RADA: Next Generation conducted the first series of offline events in the frame of the Information-consultative hub in Cherkasy.

First, the Program arranged the strategic session for Vitaliy Voitsekhivskyi, MP, Servant of the People faction, and his team to develop a roadmap for activities within the constituency under martial law. Participants identified several issues and rated the problems and challenges. Participants came up with the roadmap of 4 major dimensions of internal development of their teams and the evaluation process within the teams, activities to meet social and humanitarian needs in the region, international cooperation with donor organizations and arranging interparliamentary cooperation within constituencies, development of the local communities. USAID RADA: Next Generation will support the MP’s team in finalizing the document and implementing the roadmap. Program conducted training on strategic communication within the constituency for MP Vitaliy Voitsekhivskyi and his team on June 16-17. USAID RADA: Next Generation provided an overview of strategic communications for the MPs’ team and presented the practical tools for effective communication within the team and external communication with various target groups: NGOs, local self-governments, media representatives, etc to acquaint themselves with successful communication practices.

USAID Rada: Next Generation Program facilitated the webinar with the University of Pennsylvania on best practices for legislatures in times of crisis.

On June 16, Ukrainian MP, Olha Sovhyria, representative of the Verkhovna Rada in the Constitutional Court, Servant of the People faction, and Artem Yanchuk, Deputy Chief of Staff of the Verkhovna Rada Secretariat, presented their view of how the Parliament operates amid the war. William W. Burke-White, a law professor at the University of Pennsylvania’s Carey Law School, moderated the event.

Olha Sovhyria noted all the support she, alongside her colleagues and the whole of Ukraine, received during this difficult time and shared her insights about the challenges that MPs face today. She noted that since day 1 of the full-scale war, MPs had to be very flexible and particularly patient due to security concerns. Regarding Ukraine’s parliamentary experience, Olha Sovhyria mentioned that Ukrainian MPs managed to find consensus on many draft laws and are ready to vote for the legislation, which was preliminarily discussed in the committees to present the most prepared draft laws into session. She also emphasized that the primary task for MPs is to promote further allocation of assistance and help delivery, including via parliamentary diplomacy.

Artem Yanchuk, Deputy Chief of Staff of the Verkhovna Rada Secretariat, mentioned that the Verkhovna Rada of Ukraine does its best in order to preserve the rule of law even amid the war. He also stressed that it is essential that among more than 130 adopted laws since February 24, around 100 of them were sponsored by MPs, which means that the parliament remains a key player among the government institutions. He also noted that the Conciliation Board of Deputies factions and groups remain unclosed for MPs to gather when needed. Both speakers agreed that other parliaments should consider the security provision for legislative bodies in order for parliaments to maintain their significant role. On June 15, the working group on Ukraine’s European integration of the National Recovery Council, which USAID RADA: Next Generation is a member of, sent the finalized proposals for the National Recovery Plan. Program has contributed to parliamentary reform regarding the following proposals: the introduction of the “fast track procedure” for the draft laws on Ukraine’s EU integration, enhancing the cooperation between VRU and government regarding EU integration processes, and strengthening the institutional capacity of the VRU.

On June 16, USAID RADA: Next Generation Program assisted the Parliamentary Education Center (PEC) in the development of the Program for the Center’s activities under martial law. The program defines the priorities in internal development, events planning and approaches regarding the organization of the Educational Center’s operation. At the request of the VRU Secretariat, the Program supports PEC in Program’s development, American Councils, involved an expert on strategic planning Aliona Dolya for this work. At the second meeting, the expert together with PEC staffers presented the first results of the SWOT analysis, objectives and various activities to improve the Educational Center’s operation.

which will take place on May 29, 11 am - 1 pm (UA time). The meeting will be dedicated to Digital challenges of the Verkhovna Rada of Ukraine during wartime and after Procedure and Infrastructure. VRU leadership, as well as other MPs and members of the VRU Secretariat, Government, and civil society organizations, are invited. Registration is available till May 27, 3 pm via the link: https://forms.gle/G8Mo5QjEH9HdPbRV8