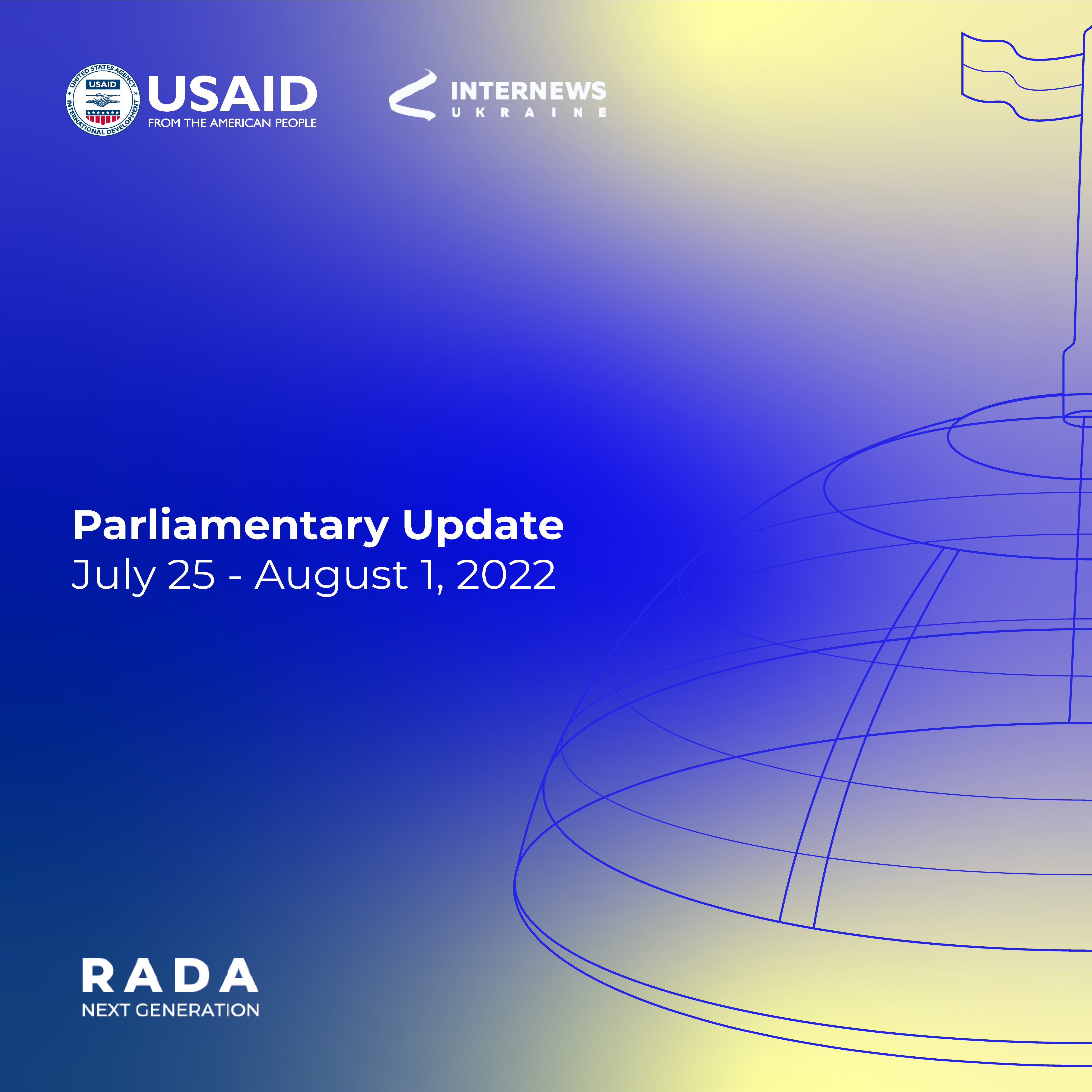 According to Ruslan Stefanchuk’s comment in the national TV marathon, some of the laws that the Parliament would approve as requested by the European Commission might cause some discussions. Particularly, he meant the draft law on the Constitutional court, the legislation regarding money laundering, and the draft laws on deoligarhization, national minorities and the laws on media regulation. Parliament’s Speaker noted that the Verkhovna Rada of Ukraine was working on the internal structural reconfiguration that the EU-related laws were approved using the “fast track”. Mr. Stefanchuk specified that the draft laws on media and national minorities would probably cause discussions. He also stressed that by late 2022 all laws related to EU integration would be approved.

The Ukrainian Parliament also adopted several laws in the first reading. In particular, it:

For 20 weeks, USAID RADA: Next Generation Program has been assisting Ukraine’s Parliament in its external communication within the Communication Task Force of the VRU Secretariat,

USAID Rada: Next Generation Program has performed the audit of SMM activities of the Verkhovna Rada of Ukraine and presented its recommendations.

On July 26, the Program presented the results of an audit of the VRU key social media profiles (Facebook, Twitter, Telegram, Instagram, YouTube, TikTok), which was conducted for a period of 12 months (July 1, 2021–June 30, 2022). The presentation took place at the VRU Secretariat's Communication Task Force meeting, chaired by Vice-Speaker of the Verkhovna Rada Olena Kondratiuk.

Based on the analysis of content, key reach and engagement metrics, trending formats, audience demos and behavior, the Program experts developed and presented recommendations for building a better social media presence for Ukrainian Parliament. The findings of the audit will be included in a package of strategic recommendations for the development of social networks of the Ukrainian Parliament, which will be produced by the Program experts and discussed during a series of strategic sessions.

On July 27, a training on digital security in wartime was arranged for representatives of the VRU Secretariat by USAID “Rada: Next Generation” Program. The Program experts dwelled on the issues of cyber hygiene, countering phishing threats and digital attacks. 36 participants from various divisions of the Ukrainian Parliament learned how to prevent the leakage of sensitive data from both personal and work devices. The training is being held in two sessions, the second of which is scheduled for August 3.

On July 27, Ukraine’s MPs and Government representatives, Croatian and Austrian parliamentary officials and donor community discussed the roadmap of the Verkhovna Rada of Ukraine transformation to meet the requirements of the EU and effectively harmonize relevant EU legislation, as well as to obtain the lessons learned from Croatia and Austria experience.

Ihor Kohut, COP of USAID RADA: Next Generation Program, noted that the European Commission put as the top priority for Ukraine to improve the legislative procedure and the process of impact assessment.

The leaders of VRU Committee on Ukraine's Integration into the EU (Ivanna Klympush-Tsintsadze and Vadym Halaichuk) focused on the special Resolution on Ukraine’s European integration being registered in the Parliament. The Resolution was supported by Nataliya Forsiuk, General Director of the Government Office for Coordination on European and Euro-Atlantic Integration, who also provided an update on the current Government's cooperation with the Parliament in processing the European integration bills.

Galyna Mykhailuk, Deputy Chair of the VRU Committee on Law Enforcement, gave an update on the Committee's work on harmonizing the criminal code with EU requirements and the establishment of cooperation with Europol and Eurojust.

Tetiana Stefiuk, Chair of the First Deputy Speaker of the VRU (Oleksandr Korniyenko) Office and a moderator of a working group developing complex amendments to the legislation in the field of parliamentary law, told about the priorities in the work of the group, including the promotion of the VRU Secretariat's institutional capacity. She highlighted that VRU had already asked the EU side to support the work group by hiring relevant experts.

Dubravka Smolić Vlaić, a member of Service for Knowledge Transfer of the Ministry of Foreign and European Affairs of Croatia who had earlier arranged a seminar on the Croatian experience in EU accession for Ukrainian MPs, expressed the willingness to further exchange experience and expertise with the Ukrainian counterparts. She expressed readiness to cooperate with the USAID Rada: Next Generation Program and provide trainings and seminars on specific issues, engaging sectoral experts for the VR Committees.

Katharina Stourzh, the Head of a special division on international cooperation in the Austrian Parliament, underlined the key role that the national parliaments play in the EU integration processes as well as the importance of parliamentary oversight of the related government activities. She highlighted the importance of EU Support Programmes (TAIEX and Twinning) for Parliaments.

Cezar Herma, a key expert on EU legal approximation and EU acquis translation, Association4U, supported that view on parliamentary oversight. Mr. Herma presented the A4U view on the cooperation between VRU and the government in the EU integration process and their plans for future support for the government: providing sectoral experts for the Governmental office and ministries and trainings.

Mr. Kohut also emphasized the successes in cooperation with parliaments of the EU Member States and announced meetings with representatives of the Montenegrin and Czech parliaments next month. USAID Rada: Next Generation Program has already established a tight network with Czech Republic Parliament, the Western Balkans countries and will continue joint activities with them to enhance VR staff knowledge. He mentioned that the Program will support Model Committees in strengthening their expertise in the EU-related issues via exchange visits and expert support from other Parliaments, which is crucial, considering the long launch process of EU Programmes (TAIEX, Twinning). Moreover, the Program will develop special training on harmonization of EU acquis for the VR staff, which will be delivered next year.

On July 28, the USAID Rada: Next Generation Program assisted the Parliamentary Education Center to conduct an online lesson dedicated to Statehood Day.

The participants learned about the main stages of the formation of Ukrainian Statehood, the first Ukrainian state formations, their leaders, and the historical premises for the establishment of Ukraine's independence. The event was held in the format of a lecture with a quiz. More than 160 participants, mostly school students, joined the lesson.

USAID Rada: Next Generation Program assisted the MP’s team in identifying local needs of the Dnipropetrovsk community while arranging information-consultative hubs to engage with voters.

On July 28-30, the Program conducted a strategic session within the Information-consultative hub in the Dnipropetrovsk region for teams of MP Serhii Demchenko and Roman Kaptelov, both Servant of the People faction. The purpose of the sessions was to identify problems, prioritize them, and develop a Roadmap for MPs and their teams for activity in the constituency/region in martial law. Participants identified several major needs in the region: social and humanitarian ones, international cooperation, environmental probless, and team development. The strategic session is aimed at assisting MP’s in introducing information-consultative hubs within their constituencies as a platform to support and strengthen MPs-constituents communication under martial law conditions.

On August 10-12, USAID Rada: Next Generation Program will conduct training on strategic communication in the constituency

for the teams of MPs Yulia Kryvoruchkina, Yurii Koriavchenkov, Volodymyr Zakharchenko, Viacheslav Rubliov, Oleksandr Horobets, all Servant of the People faction, Ihor Huz, and Iryna Konstankevych, both For the Future group.

The purpose of the training is to provide understanding of strategic communications and their importance in the work of MPs and their team in the district, familiarize with approaches and provide practical tools for effective communication in the MPs team, and communication with various target groups to acquaint with successful communication practices.