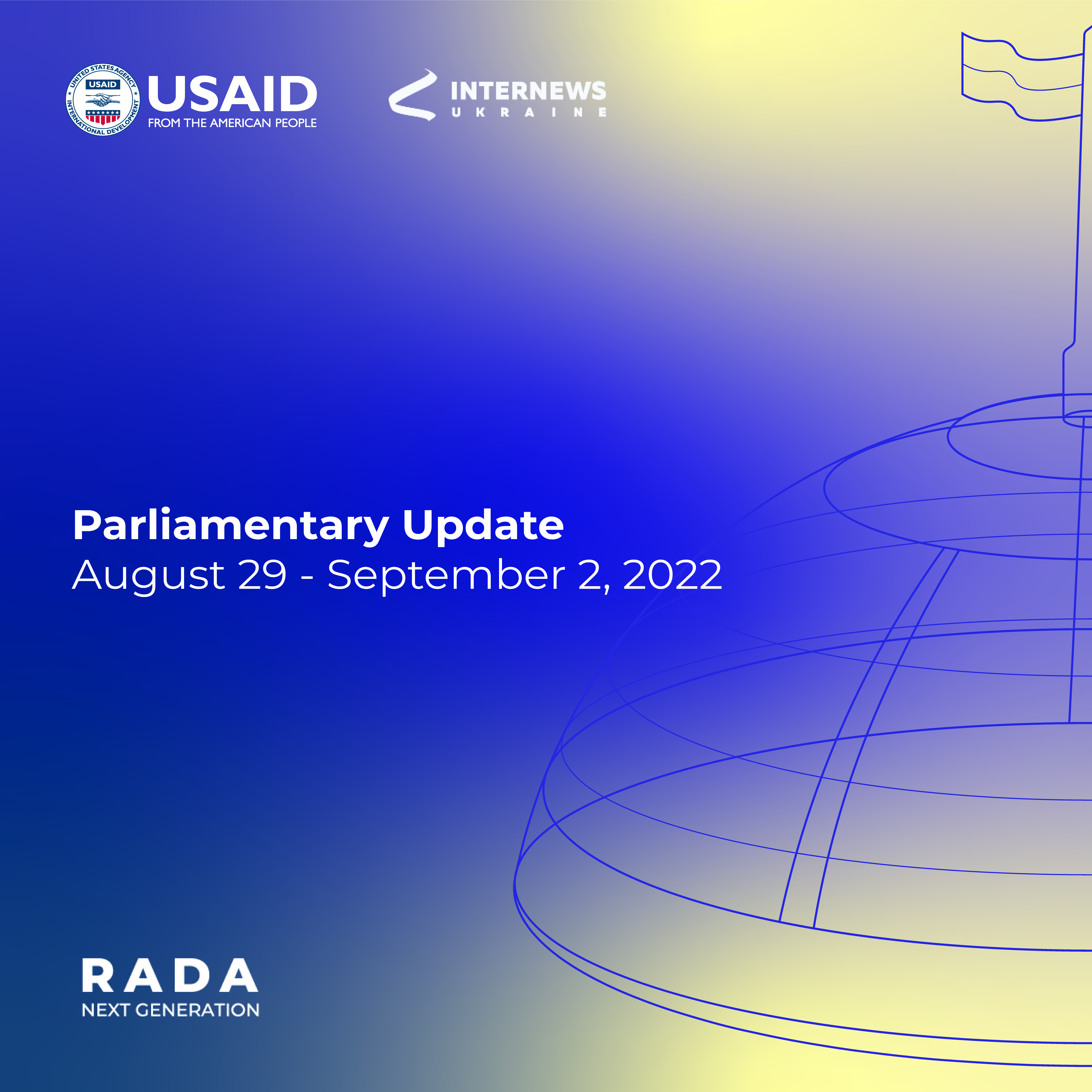 Ukraine’s Parliament adopted several laws and appealed to the UN, NATO and EU at its plenary meeting on August 30.

The Verkhovna Rada of Ukraine:

The Parliament also adopted a number of laws in the first reading:

Czech Parliament will share experience in national legislation with the EU standards with Ukraine’s Parliament.

At the Forum 2000 in Prague, President of the Czech Chamber of Deputies Markéta Pekarová Adamová announced that Czech Parliament would initiate a program of cooperation with the Verkhovna Rada of Ukraine to share its experience in harmonizing national legislation with the EU standards. Chair of the VRU European Integration Committee Ivanna Klympush-Tsintsadze, who also participated in the forum, welcomed the initiative, saying that the success of Ukraine’s European integration largely depends on the institutional capacity and ability to learn.

Ivanna Klympush-Tsintsadze, Chair of the VRU Committee on EU Integration: reconstruction of Ukraine should take place simultaneously with transformation and European integration.

During the aforementioned forum, Ivanna Klympush-Tsintsadze thanked everyone who is visiting Ukraine today not only to express solidarity with the Ukrainian people, but also to understand Ukraine's needs and return with concrete proposals and concrete help. "Ukraine really needs this right now. It is very important for us that our partners do not get tired, because we have no right to be tired. We will continue to fight and live," said the Chair of the Committee.

VRU Speaker Ruslan Stefanchuk: remote voting is not on the agenda, but it does not violate the in-person voting requirements, set in the Ukrainian Constitution.

According to Ruslan Stefanchuk’s recent interview, the idea of online voting might be introduced again in the parliament in case of urgent need. He also noted that this legislative novation does not violate the Constitution.

For 25 weeks, USAID RADA: Next Generation Program has been assisting Ukraine’s Parliament in its external communication within the Communication Task Force of the VRU Secretariat,

Program experts continued to support the activities of a working group on parliamentary reform.

Also, on September 2, Program's experts held a meeting with Pavlo Frolov and agreed to work further on the updated Concept of the legislative process issues and parliamentary control strengthening.

VRU Secretariat members visited the US Capitol Visitor Center during a study tour organized by the Program.

This visit is aimed at sharing experience regarding the possible establishment of a similar office in Ukraine’s Parliament.

On September 6-8, Program will conduct training on Parliamentary oversight

for the Committee on Social Policy and Protection of Veterans' Rights.

On September 8-9, Program will conduct a strategic session for teams of MPs Serhii Hryvko and Valerii Zub, Servant of the People faction,

in the frames of the Information-consultative hub in the Chernihiv region.