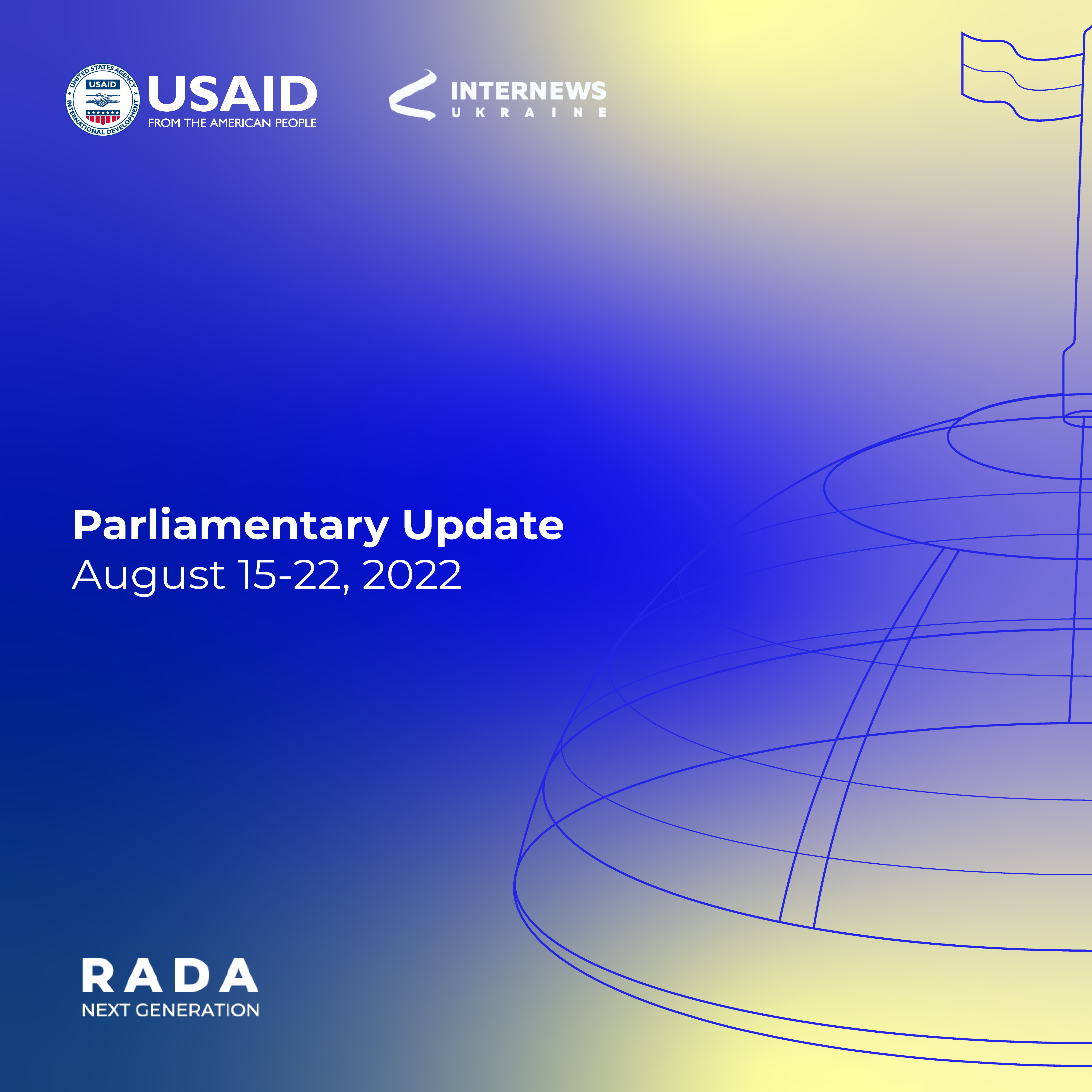 According to Suspline, Ukraine’s Parliament voted in favor of prolonging the martial law till November 21 this year, as well as the general mobilization.

Also, the Verkhovna Rada of Ukraine appointed two members of the High Council of Justice, Roman Maselko and Dmytro Moroz.

On August 15-16, VRU had a plenary meeting and adopted some necessary laws and appeals.

Adopted in the first reading:

In July, MPs adopted changes in the Rules of Procedure transforming the **Institute of legislation* into the Parliamentary Research Service (PRS)**. On August 11, the Statute of the PRS was officially signed by VRU Chairman Ruslan Stefanchuk, thus marking the final step for the full-fledged launch of the Research Service within the Verkhovna Rada of Ukraine.

For over six years, USAID assisted VRU in establishing the parliamentary research service (PRS). Upon the VRU's request and in strong cooperation with the VRU Secretariat key staff, USAID assisted in the development of the PRS model, conducting advocacy campaigns to increase MPs and VRU staff knowledge about the role and functions of the PRS, in the establishment of contacts with the research services worldwide. For the last two years, USAID, as a part of the PRS advocacy campaign, has supported the work of young researchers who provided around 300 analytical notes for the MPs.

An MP from the Servant of the People faction asked VRU Chairman to suspend the mandates of three MPs, former members of the Opposition Platform for life faction.

Maryana Bezuhla, MP, Servant of the People faction, stressed that according to the Ukrainian Pravda media outlet, there are some Ukrainian lawmakers who are now in Monaco. She claims that Hryhoriy Surkis, Vadym Stolar and Ihor Abramovych live abroad and do not execute MPs’ functions.

For 23 weeks, USAID RADA: Next Generation Program has been assisting Ukraine’s Parliament in its external communication within the Communication Task Force of the VRU Secretariat,

USAID "Rada: Next Generation" Program arranged cooperation with a newly selected advisor on European integration for the Chairman of the VRU Stefanchuk.

On August 18, RANG met with Advisor Mykhailo Latunskiy and discussed cooperation, particularly, training on EU integration issues for the VRU staff, assistance in establishing the center for harmonization of the EU law, other units that could assist VRU, support in communication about the VRU results in adopting the EU legislation, expert support for the sub-committees on EU integration.

It was agreed that RANG will prepare an analytical note on EU tools/funds for parliamentary support, and will communicate with other projects/partners about possible training for staff. Moreover, RANG will share ideas about possible unit models for harmonizing the EU law model.

VRU representatives joined the discussion on the Green Book of Legislative Process for its further improvement.

On August 18, USAID "Rada: Next Generation" Program arranged the fourth and final meeting in a series of stakeholder discussions regarding the Green Book of Legislative Process. During a meeting, members of MPs teams, government representatives, civil society experts, and scholars discussed the process of drafting laws and their implementation. In addition, the survey was conducted to improve the research regarding the relevance of the stated problems and their possible improvement. Based on the results of these discussions, the experts will summarize all proposals and proceed to the White Book of Legislative Process development.

RANG experts continued to activities of a working group on parliamentary reform.

On August 18, RANG experts prepared and submitted to the chair of the working group's unit, MP Pavlo Frolov, a draft of the Concept on the legislative process issues and parliamentary control strengthening.

The draft concept includes a description of the current situation and identified problems, goals, and objectives of the reform in four chapters:

On August 25, members of the VRU Secretariat, Verkhovna Rada of Ukraine and Internews Ukraine will start their US Study Tour, which will last till September 4.

Participants will get acquainted with approaches to constituent participation in legislative processes, including better and more frequent engagement between elected officials and individual constituents, civil society groups, and business associations; explore the analytical and oversight capacity needed to ensure an end-to-end legislative process; and the use of technology in facilitating the effective and efficient delivery of government services and functions.