Working as an Orchestra: 13 Facts about Internews Ukraine You Didn’t Know

September is always the beginning of a new season; it means new plans and ambitions, summarizing the outcomes, and working on yourself. Internews Ukraine works as a real orchestra, in which every employee, partner, and donor plays a unique part. Why it is important not only for one organization but for the whole country as well is described in our report for the previous business-season – January-August 2017.

Since the beginning of 2017, two our publications were released. The Internews Ukraine team prepared recommendations on how to make online work and communication safe for the media, authorities, and the Internet community. The Reforms Guide book, about the key social transformations, their evolution and prospects is unique. For the first time in Ukraine, independent experts’ materials were collected under a convenient and attractive design. Presentation of the book for the friends of Internews Ukraine in the beginning of August 2017 was accompanied by an uncommon ceremony of acknowledging the reforms heroes, The Reforms Guide Awards.

During this season, three web-sites with analytics were launched. We open Ukraine for foreign journalists and politicians with the articles on UkraineWorld, and we speak in detail about 17 key reforms on The Reforms Guide. The latest news from the new media world is always available on the Internet Freedom web-site.

We discovered not only our own talents, but talents of others as well. In summer 2017, the first School of Creative Writing for ATO veterans, VoiceofWar, was held. As a result of the training, a collection of the best works will be published. The Internews Ukraine team is also getting immersed in creativity – this year, new creative space, Malevych Room was created in the office for all employees and our guests. 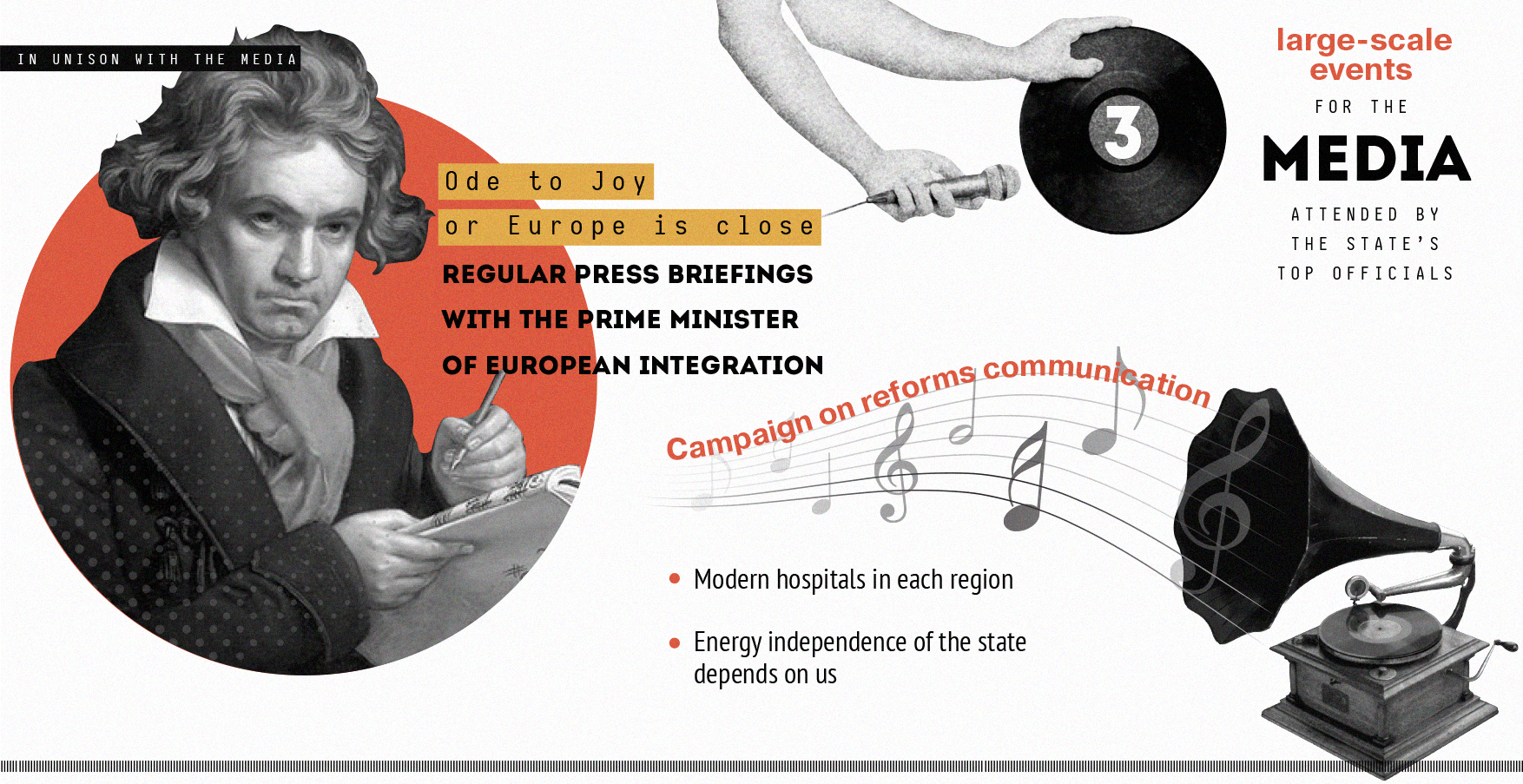 Internews Ukraine plays in unison with the media. We support and facilitate their development, explain reforms and positive changes in the country. Over the last eight months in 2017, regional journalists had an opportunity to discuss pension reform with the Prime Minister Volodymyr Hroisman, and achievements of the Verkhovna Rada with Speaker Andrii Parubii. Briefings with Vice Prime Minister of European and Euro-Atlantic Integration Ivanna Klympush-Tsyntsadze and relevant Cabinet officials became regular. Internews Ukraine takes an active part in health care and energy reforms communication – from training sessions for the media to videos, infographics, and other interactive materials. State transformations are explained with the help of legendary cartoon characters – three Cossacks. 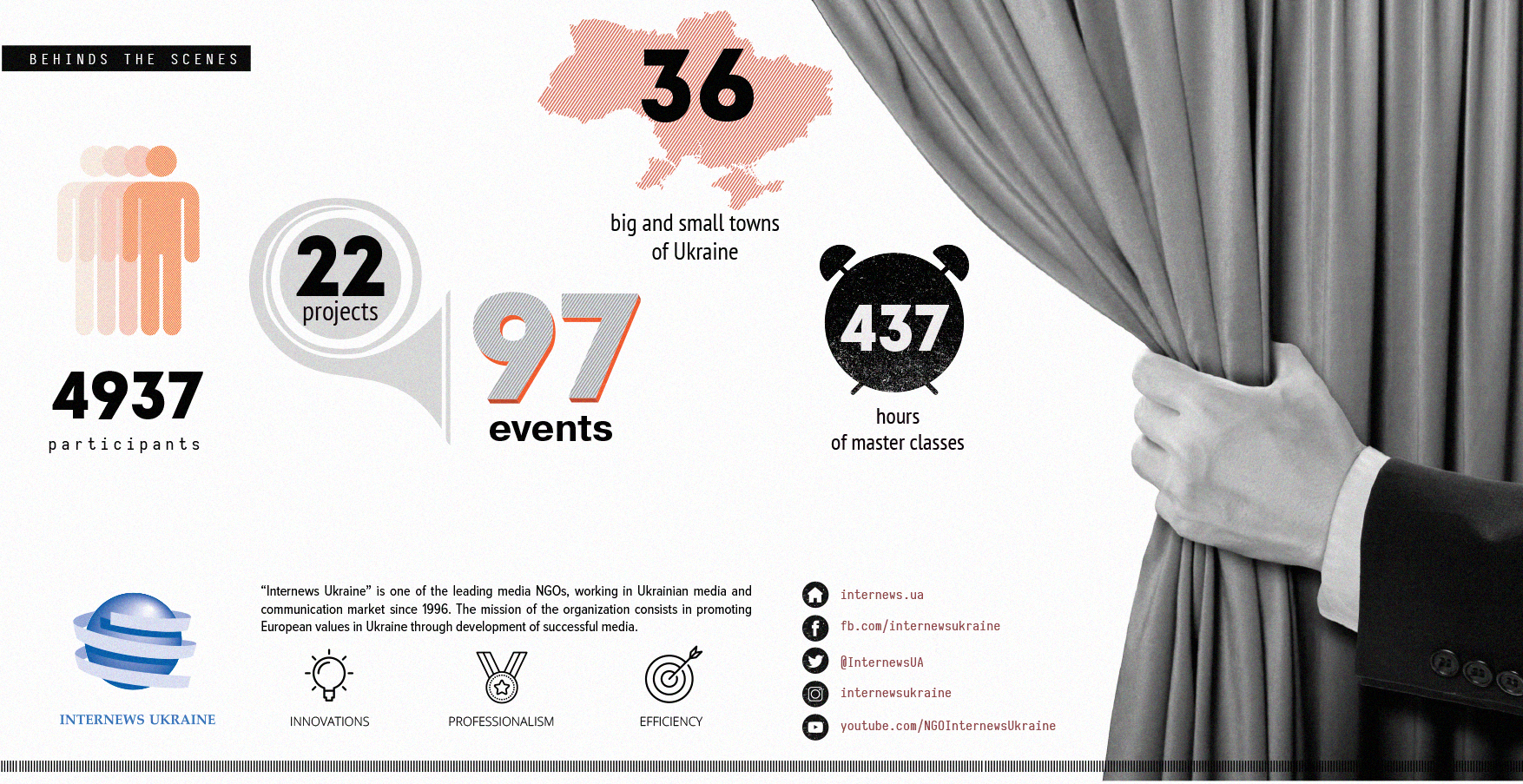 From January to August 2017, we were implementing22 big projects. We held 97 events: from small meetings and informal communication to large-scale conferences. This means more than 437 hours of training and discoveries. Our work brought together nearly 5 000 Ukrainians from 36 big and small towns of Ukraine. The special feature of this season was involving the media, activists, and the youth from Chuhuiev, Kolomyia, Kovel, Sambir, Mukachevo, Pavlohrad, Chornomorsk, Sloviansk, and other small Ukrainian towns in the European transformations process.

Internews Ukraine begins a new, not less active season. We have new ideas, inspirations, and melodies. Join the changes, and become better every day.