Using its vast media contacts and analytical expertise, Internews Ukraine, one of the biggest Ukrainian media NGOs, prepared a comprehensive Ukrainian Regional Media Guide. The document provides an overview of more than 400 regional media outlets in all 24 oblasts of Ukraine, as well as temporarily occupied territories.

Why is this Regional Media Guide unique?

Regional media outlets are an important source of information in Ukraine. In many oblasts, regional media outlets are highly dependent on their ownership. These owners, however, are not always influential business people; they can be local politicians (mayors, heads of oblast state administrations, or members of city or oblast councils). Reform proponents often bemoan the lack of division between business and politics on a national level in Ukraine; but on the local level, this lack is no less obvious.

Consider the example of de-nationalization, or privatization (rozderzhavlennia): Ukrainian regional media is going through a difficult period of reform in which outlets (mostly newspapers) which were founded and funded from local authorities’ budgets are now supposed to become independent and earn their own money. This de-nationalization is taking place de jure, but in reality, ostensibly de-nationalized outlets continue to covertly or openly receive funding from local authorities in many oblasts. This enables a city mayor, a member of a local council, or a member of a regional state administration to influence the region’s information landscape.

Some regional media outlets are aligned with major national political forces. The most prominent of these forces include European Solidarity of former president Petro Poroshenko, current President Zelensky's Servant of the People, the more Russia-friendly Opposition Platform For Life (OPSZh) of Putin ally Victor Medvedchuk and Opposition Bloc of oligarch Rinat Akhmetov, Batkivshchyna party of Yulia Tymoshenko; the nationalist Svoboda party, and other more local political parties. This alignment often manifests in especially friendly coverage of the parties, their local representatives, and their patrons, rather than in an explicitly ideological bent. 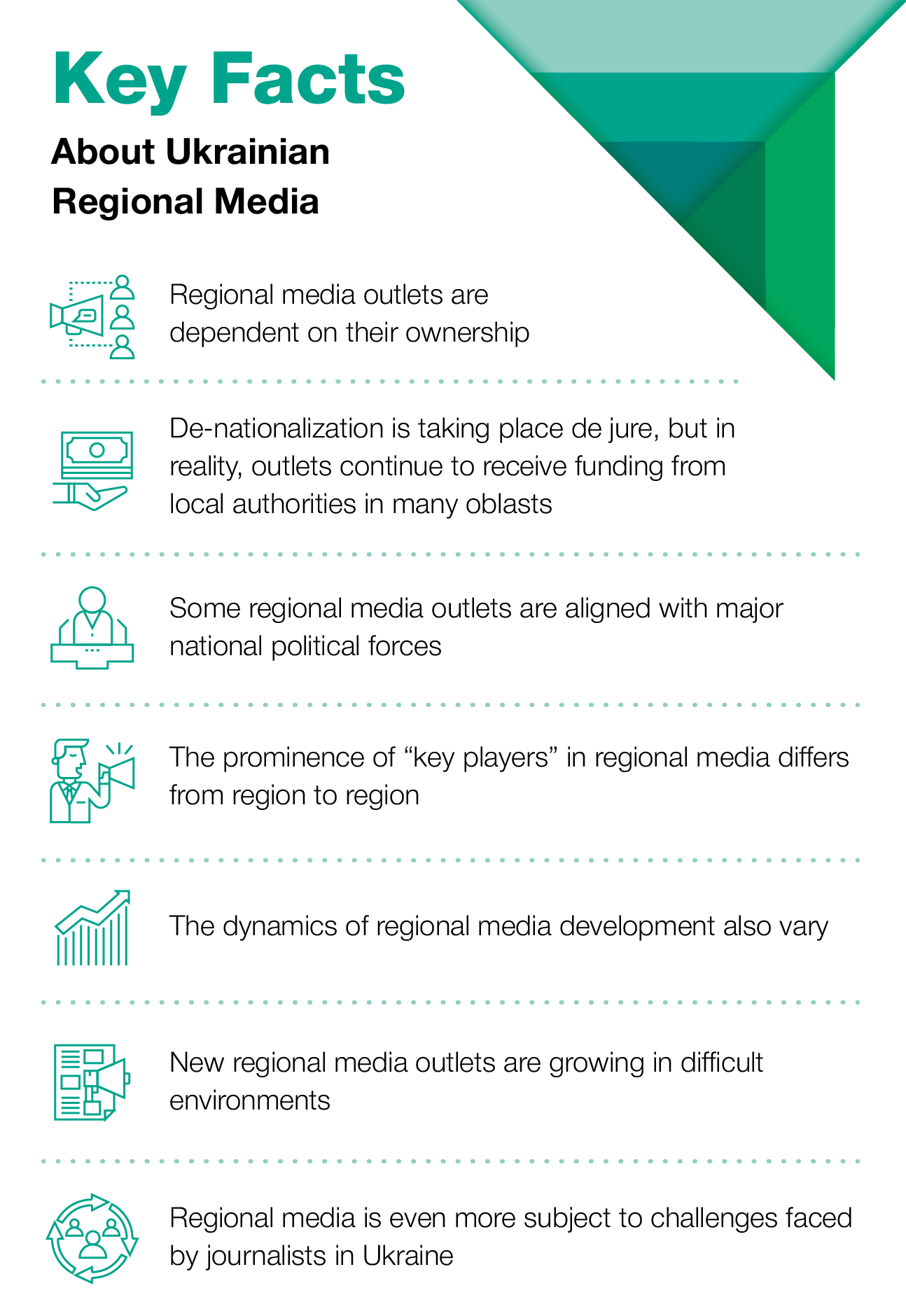 It is also worth noting that the prominence of “key players” influencing a region’s media can differ from region to region. They can be nationally-recognized power brokers, like in Dnipro, Kharkiv, Zaporizzhia, and government-controlled Donetsk Oblast. They can be quite low-level — mainly in the less-wealthy regions which do not attract large-scale business or politics, like in Mykolaiv, Kherson, and in central Ukraine. Alternatively, they can be more locally-delineated, but by virtue of their regions’ unique political dynamics, rather than relative weakness. We see this trend in oblasts like Odesa and Lviv.

The dynamics of regional media development can also vary. There may be a vibrant news media scene, like in Odesa and Lviv. The news landscape can be modest, like in Zhytomyr or Khmelnytskyi. The media environment can be subject to substantial Russian influence, like in the Southern and Eastern oblasts; or other influences, like from Hungary in Zakarpattia and Romania in Bukovyna (Chernivtsi Oblast).

An especially interesting trend is the growth of new regional media in difficult environments. There is an emerging network of rayon.in.ua websites started in Volyn Oblast and is expanding to neighbouring regions like Rivne and Transcarpathia. We can also look at how regional media outlets are working with modern technology and media trends by launching social media extensions; expanding onto Facebook, Youtube, Telegram and TikTok; and building convergent multimedia platforms by offering websites in addition to their traditional print or TV domains. All of this offers hope.

At the same time, regional media are not less subject to challenges faced by journalists in Ukraine: a lack of resources, dependence on their “owners” and other influential people in their regions; the great inherent volatility of their profession; and their technological lag behind peers in other countries and in the national media. The coronavirus pandemic has made their situation even more precarious.

How we made the Guide

The Ukrainian Regional Media Guide is based on Internews Ukraine multi-year work study with a network of regional journalists. In each of Ukraine’s 24 oblasts, the organisation's analysts contacted journalists and media experts. It conducted over 60 such interviews which, put together, span over 40 hours of recording. Then this information was checked with open-source data, such as information available on media websites and data from state registers.

Information in this Guide is structured by Oblast. Each chapter has four sections:

The Ukrainian media landscape is dynamic, and thus information about it can quickly become out-of-date. Therefore, provide regular updates to this report.

We would be glad to provide a copy of the Guide, as well as present more detailed information on items discussed in the report, upon request.