Since the beginning of work of the new Rada, Ukrainians have scrutinized and criticized every decision of the new MPs and the President’s appointees. Today, their feelings, estimations and reactions fit into an already usual Ukrainian dichotomy, two extremes of reaction to political and social processes: “zrada” and “peremoha”, “betrayal” and “victory” in Ukrainian. So what is the new parliament for Ukrainians? Is there a middle ground?

To see how Ukrainians perceive the work of the new government, Internews Ukraine and UkraineWorld experts analyzed data on three main social media in Ukraine that is Facebook, Instagram and VK. Our research covered the first two weeks of the new Rada in the period from 29 August to 15 September 2019.

Out of these numbers we dug into posts about the parliament and parties:

Here are our 10 key conclusions.

The first steps taken by the new Ukrainian Parliament have become another bone of contention in the Ukrainian segment of Facebook. The pre-election rivalry between the so-called “porokhobots” (supporters of Ukraine’s former president Petro Poroshenko) and “zelebots” (fans of the incumbent president Volodymyr Zelensky) turned into the “new vs. old Rada” contest in its pointing at the “victories” and “failures” of political opponents.

Zelensky’s supporters often justify the initiatives of the parliamentary majority and compare them with Poroshenko’s reluctance to reform the judiciary and to eliminate high-level corruption, referring to the “fake” state position of his party, etc. At the same time, fans of Poroshenko often recall his presidency and the previous Rada as “the best in Ukraine’s history”. 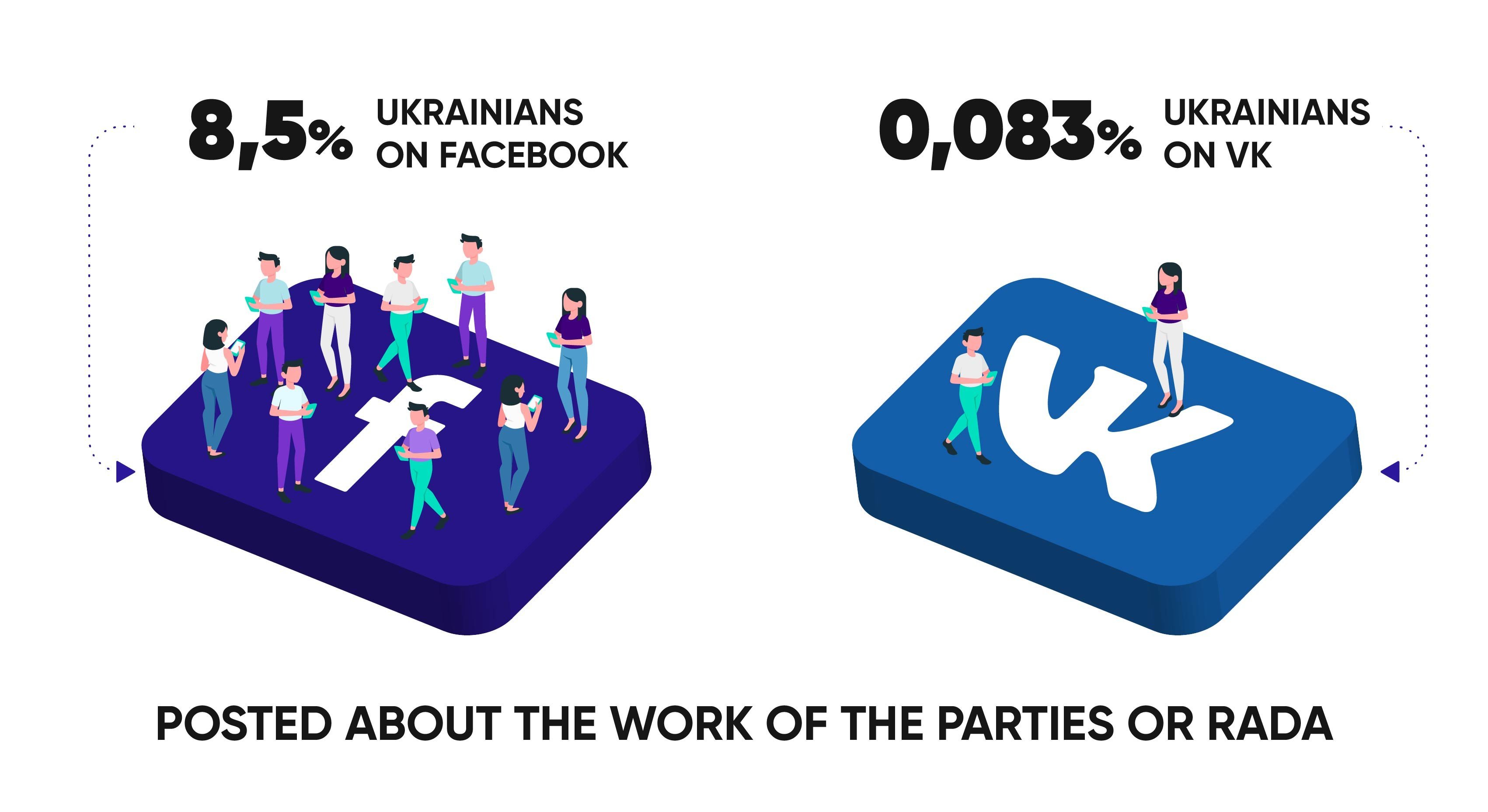 While “zelebots” and neutral Facebook users were bashing Poroshenko for his old appointees (such as Yuriy Lutsenko), the new government is, in the eyes of many top authors, following the destiny of its predecessors. Among Zelensky’s new appointments, Arsen Avakov turned out to be too controversial to accept. Some Ukrainians wrote that the new-old Minister of Internal Affairs was “a univocal minus”, which hit Zelensky’s rating hard.

3. What ignites “victory” and “betrayal”

Some issues became common ‘hot potatoes’ for Facebook, Instagram and VK. The prisoner swap and the Steinmeier Formula evoked especially fierce debates. Most Ukrainian users expressed joy at the return of Ukrainian political prisoners. Many Facebook posts echoed one stating that President Zelensky “is an advocate of “the state for people” as opposed to Poroshenko, who neglected human lives. Others were critical of the extradition of Volodymyr Tsemakh to Russia. The event was also the reason for emotional appraisal of the new government on Instagram and the traditionally diminutive rhetoric of pro-Russian users on VK.

Relations with Russia became another spark of concern. On Facebook, Poroshenko’s supporters, as well as neutral users, labelled Zelensky’s attempts at stopping the war as “capitulation”. Opinion battles sparked around elections in the Donbas, Ukraine’s risks of losing its sovereignty and the Minsk Agreements. 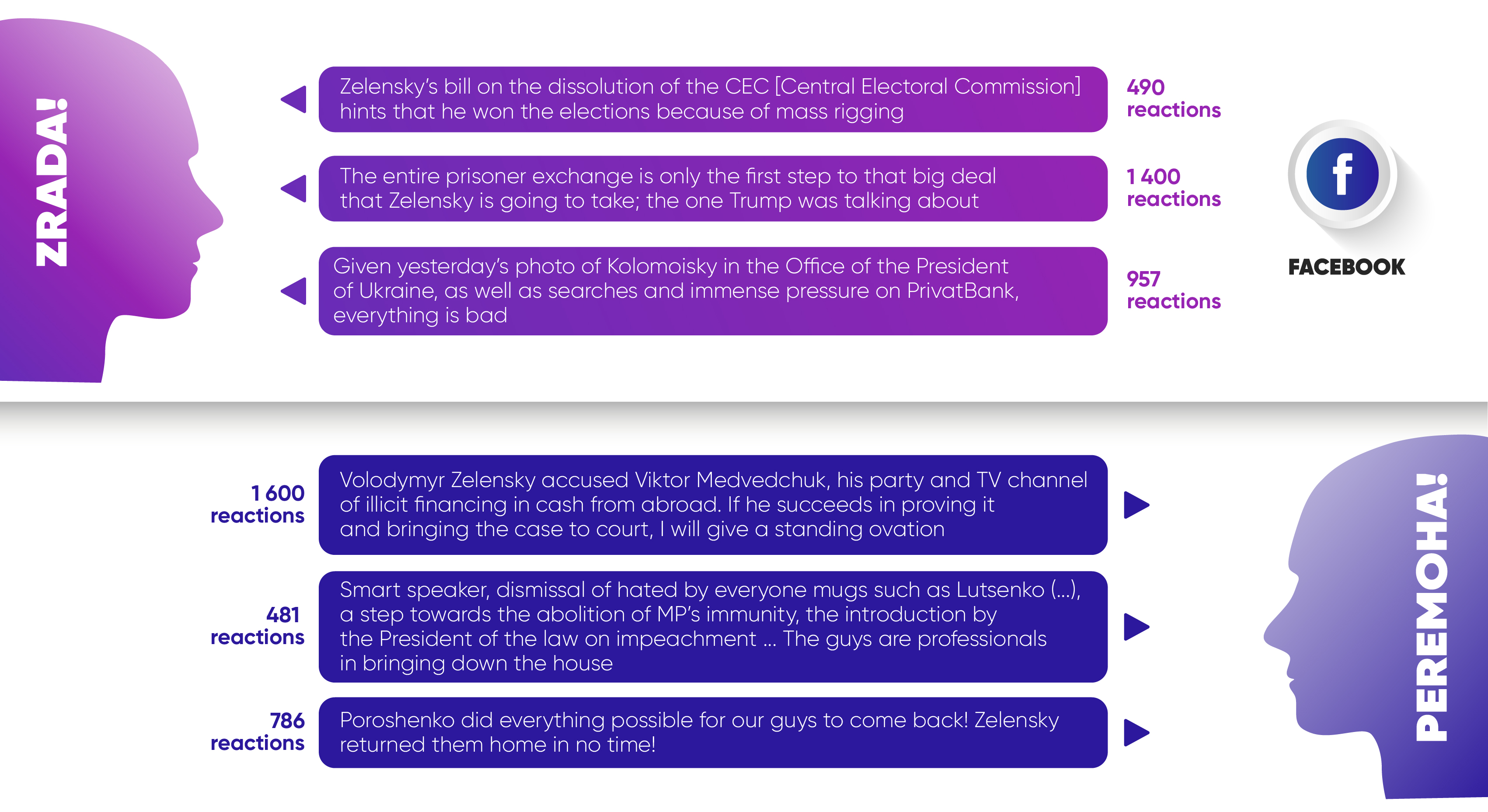 4. Between a rock and a hard place: cold minds on Facebook

Despite waves of severe criticism from two rival Facebook sides there is, in the middle, a segment of experts and analysts with thousands of followers who try to keep a distance and analyse the work of Parliament with an unbiased eye.

A lot of top posts from Servant of the People (read Rada) are full of hopes and expectations. An active Facebook author with 38,712 followers (at the time of the research) made a long “TOR for the president”, indicating the key points for transforming the country - from information campaigns to the regeneration of Ukrainian rocket science. One of the paragraphs is devoted to Zelensky’s promise to hold “odious figures of former times” accountable. Neutral critics also see the new government as a natural reaction to Poroshenko’s inaction. While referring to his flaws, they are also suspicious of Zelensky’s plans.

What unites Ukrainian segments of Facebook and VK is their penchant for negativity. The total percentage of negative posts about the Verkhovna Rada reached 56% on Facebook and almost 74% on VK. Often positive or neutral rhetoric about certain political forces is based on negative rhetoric about others.

The parliamentary majority is in the firing line both on Facebook and VK. More than 58% of Facebook posts and more than 70% of VK posts about Zelensky’s party were negative. Many experts criticise Zelensky and his MPs for “anti-Ukrainian” initiatives. These range from the draft law “On State Support for Cinematography” to the dismissal of the Central Election Commission. The fact that the Rada belongs to the Ze-majority is among the top concerns. A popular Facebook author with 16,529 followers finishes his posts with the same sentence: “Parliament and the government are the shadows of Tsar Zelensky”. 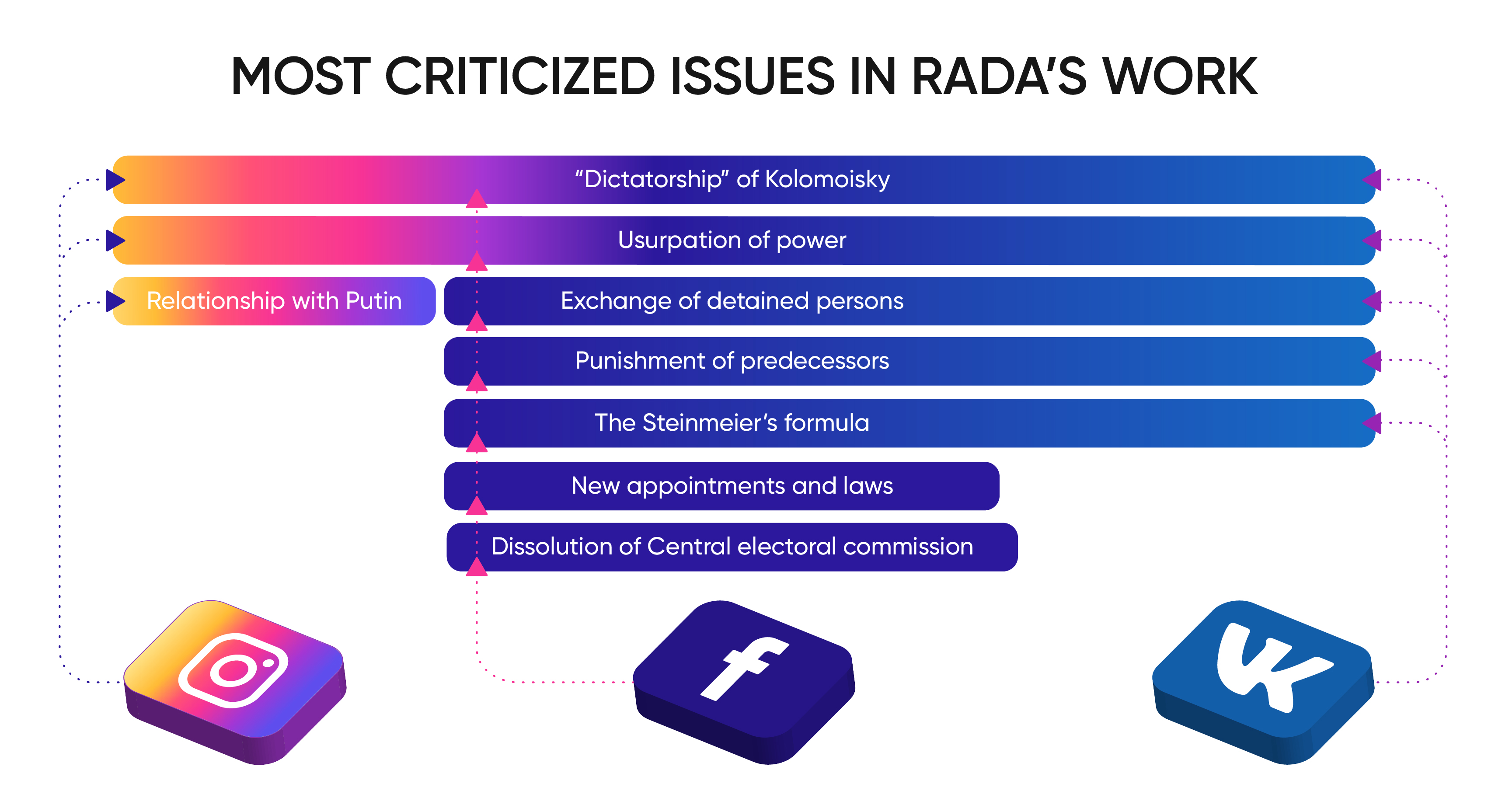 6. The non-existent opposition is ”no better", either

Facebook and VK users are mostly neutral or negative about the four other Ukrainian parties that rank after Servant of the People. Poroshenko’s European Solidarity got 49% of negative posts on Facebook and almost 56% on VK. In the Facebook ranking, Boyko’s Opposition Platform even outran Zelensky’s ruling party: more than 76% of posts were negative. The situation was slightly better for Tymoshenko’s and Vakarchuk’s parties, which received more neutral and positive posts in total.

European Solidarity got the biggest amount of attention after the Servant of the People: more than 2,500 posts on Facebook as compared to almost 6,700 posts about SoP. On VK, the proportion is similar. In the attention scale, other parties fall far behind.

While the opposition of two virtual camps is still present on VK, it is much less striking due to the more vivid presence of pro-Russian Ukrainians. Compared to the last research, the visibility of pro-Ukrainian users has decreased since the snap parliamentary elections. Pro-Russian users such as the same old analysts for propaganda media such as Maksym Ravreba led the top list. These users continue bashing Ukraine’s government, past or present, but hatred and mockery mostly concern the incumbent President Zelensky.

Nonetheless, they jump all over Ukrainian politicians regardless of their party. 72% of 150 mixed posts are negative. It is notable that pro-Ukrainian users often contribute to this flow of negativity about the Ukrainian Parliament. 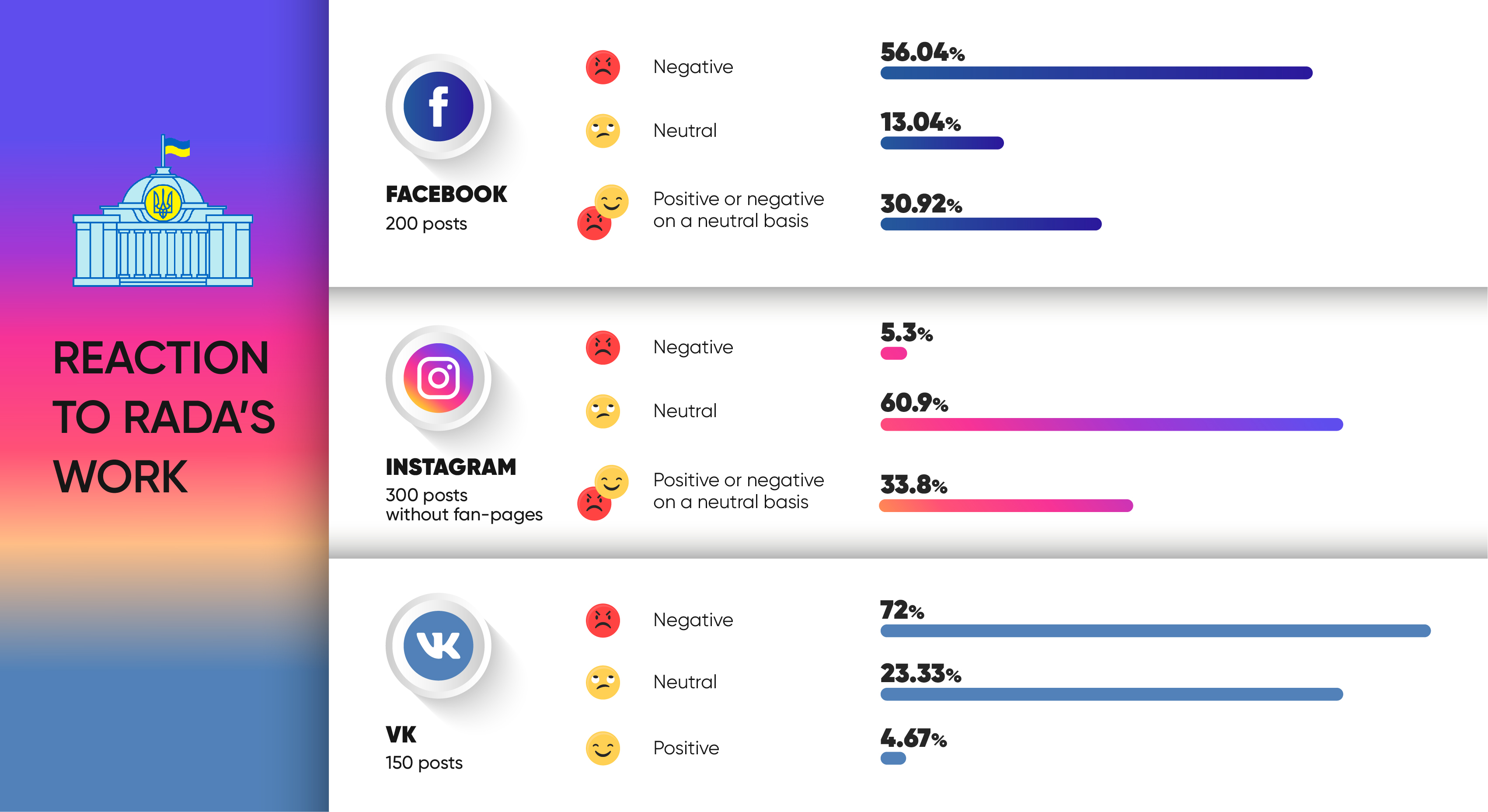 The Instagram community was the most neutral when appraising the activities of the new government (60.9% of all posts). Nonetheless, the tonality of posts about Servant of the People, Holos and Batkivshchyna was overwhelmingly positive. 96.18%, 94.4% and 88.4% (respectively) of posts about these political forces were either positive or neutral. European Solidarity and Opposition Platform—For Life, however, were mostly criticized, with 65% and 62,5% of negative posts and only 7% and 15% of positive ones, respectively.

The self-generated content might be a reason why Instagram remains the most “positive” of all three social media. Zelensky’s Servant of the People gets all the attention and praise, silencing voices about other parties. To compare, there were 7,155 posts about Zelensky’s party and just 688 about Poroshenko’s ES. Here, the Opposition Platform is the least visible: only 48 related posts. 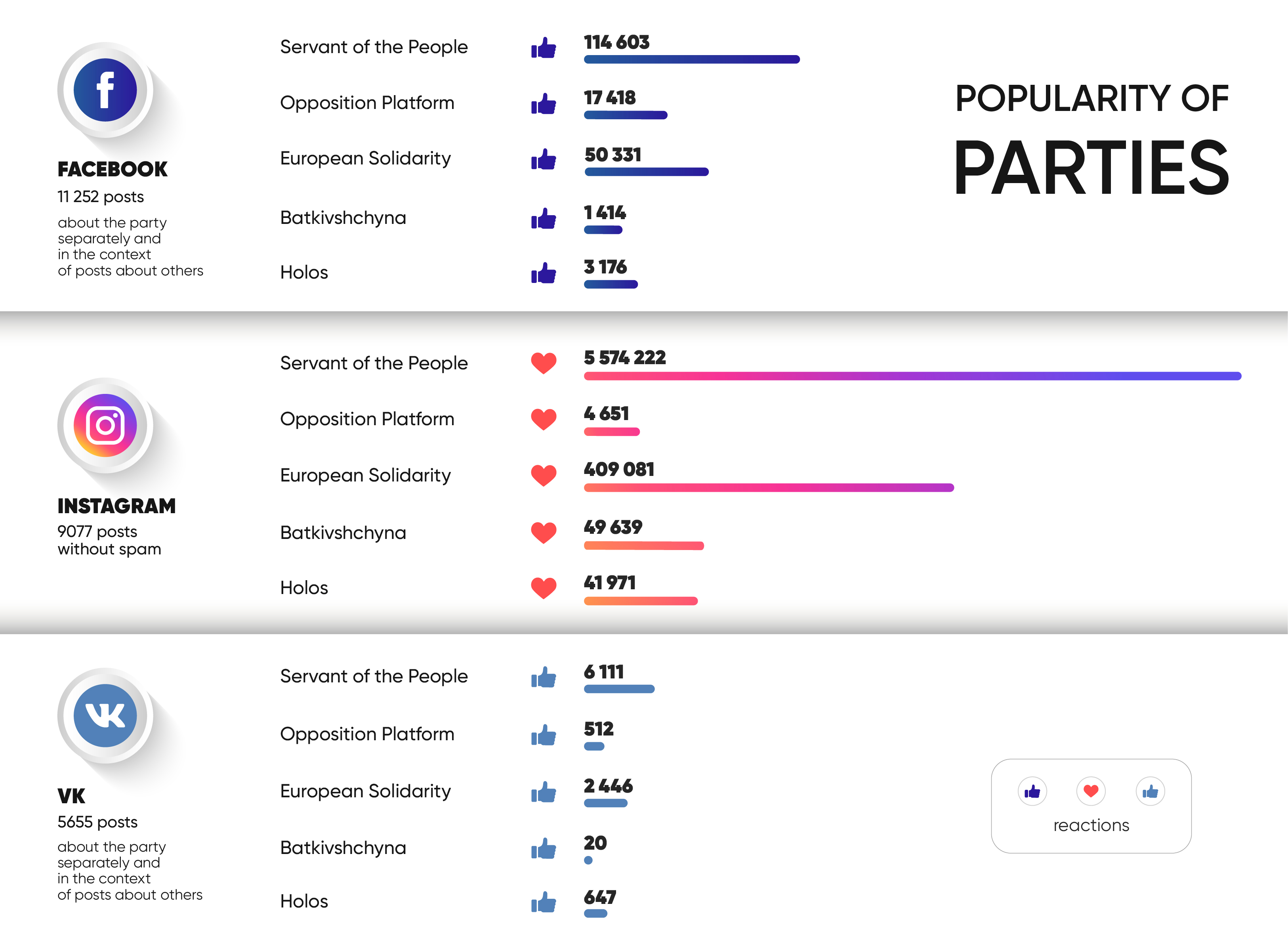 Given the top posts from the sample of more than 11 k, Ukrainian Facebook is largely pro-Ukrainian. Many are explicit in their rage towards the Opposition Platform and its deputy leader and Putin’s friend, Viktor Medvedchuk. Nevertheless, the influence of pro-Kremlin narratives can be noticed through single supporters of the pro-Russian party “Nashi” (“Ours”) or the Opposition Platform. A Facebook user from Odesa wrote a long post on how billionaire George Soros “interferes” in Ukraine’s domestic affairs. This rhetoric occupied a place in the top posts on Instagram, and among numerous anti-Ukrainian posts on VK. Pro-Russian VK users now put Zelensky’s government in the same line with that of Poroshenko. 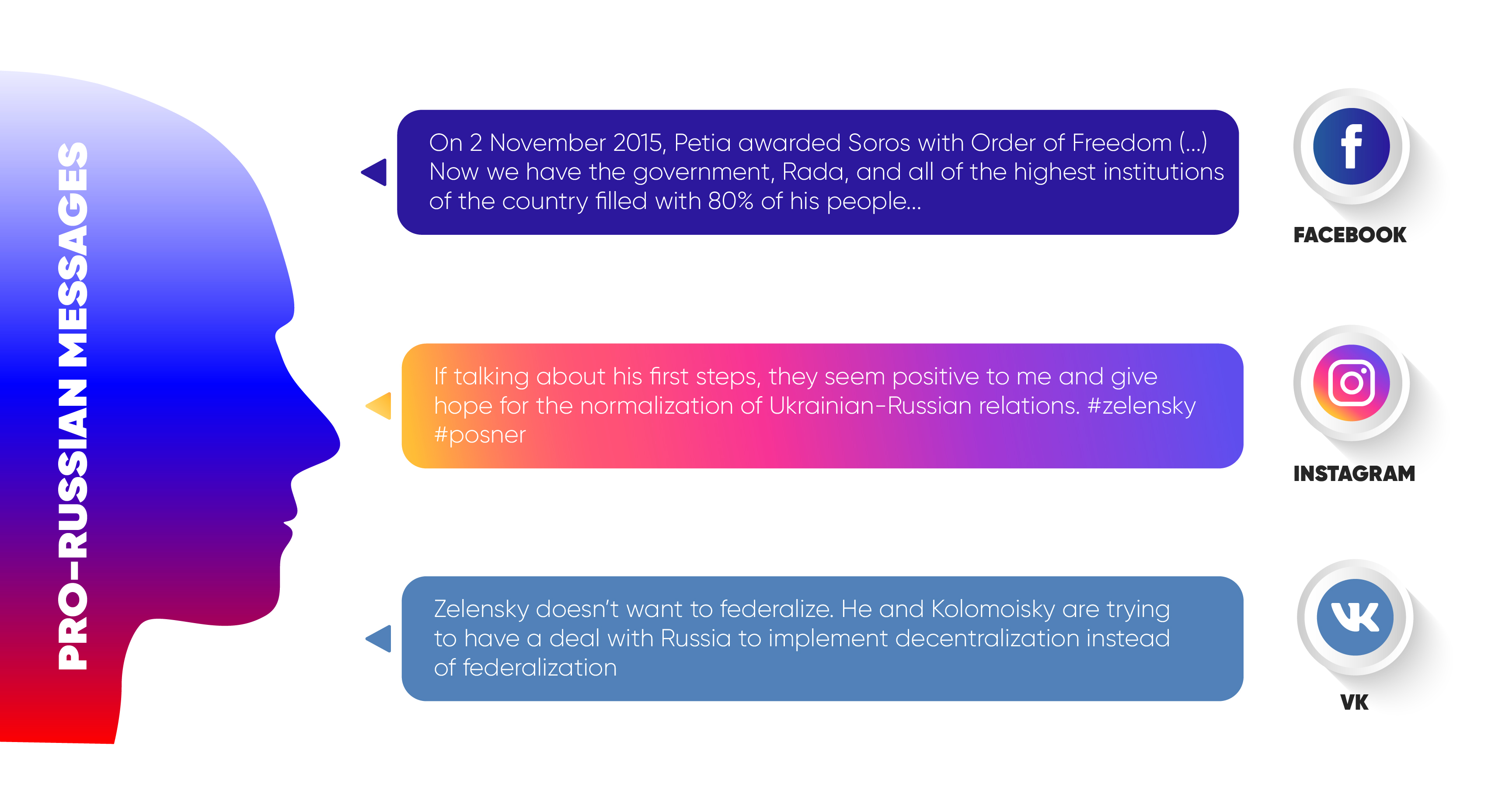 Ukrainians on Facebook, Instagram and VK are united in their adherence to political memes. It seems to be one of the most comprehensive ways to express their attitude towards the new government and politicians. The top authors on Facebook and VK did not pass over a chance to react to the President’s meeting with oligarch Kolomoisky. For instance, on Facebook, one posted a picture of the meeting with the caption “Volodymyr Zelensky met the president of Ukraine”.

Instagram leads the way with political memes. Satirical videos mocking Poroshenko became popular against a background that was praiseworthy of Zelensky. Some of those include Zelensky kicking Poroshenko out of the Rada; Zelensky facepalmed during Poroshenko’s speech prior to the vote on cancellation of MPs immunity, etc.

The research was carried out upon an initiative by the NGO Internews-Ukraine, with Neural Networks and methods of Artificial Intelligence, namely:

This project is done with support of NGO Internews