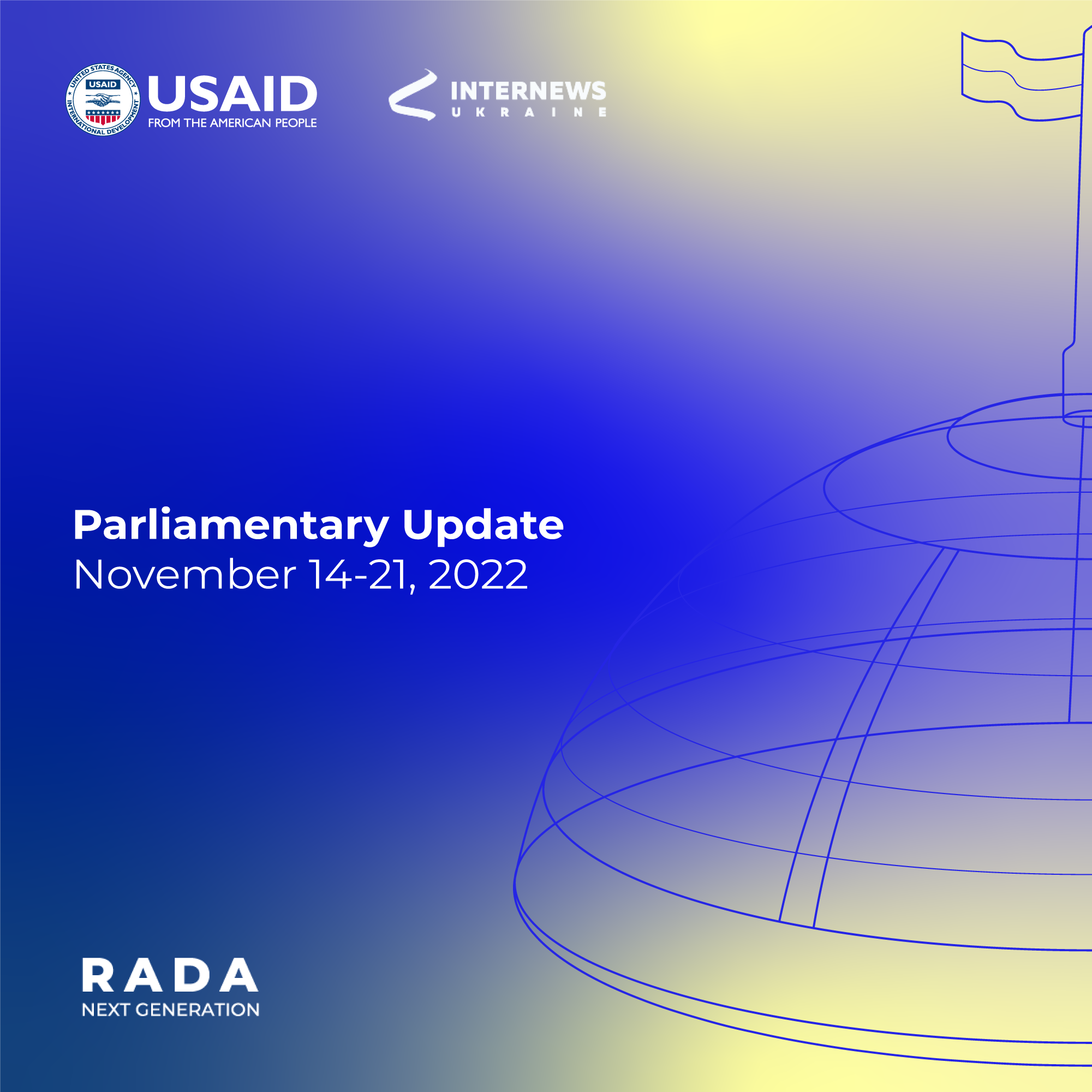 The attack was the most large-scale one to date, with russian missiles targeting Kyiv, Khmelnytskyi, Rivne, Volyn, Lviv, Zhytomyr, Vinnytsia, Dnipropetrovsk, Poltava, and Kharkiv regions. Because of the attack, a missile struck the territory of Poland at the village of Przewodów near the border with Ukraine.

Overall, since the beginning of the full-scale war, russia launched 4700 missiles at Ukraine.

District Court of The Hague issued a verdict in the MH17 case, recognizing the so-called “DPR” as russia’s proxy.

On November 17, the District Court of The Hague, sitting in the MH17 criminal case, sentenced accused Kharchenko, Dubinskiy, and Girkin to life imprisonment for causing the crash of Flight MH17 in 2014 and the murder of the 298 persons on board.

The Court has established that from April 2014, an armed conflict was in progress between the Ukrainian armed forces and separatist groups, one of which was fighting under the name “Donetsk People’s Republic” (“DPR”). According to the court, abundant indications reveal that from mid-May 2014, the DPR, in fact, took directions from russia; as a result, russia’s involvement in the conflict with Ukraine led it to become an international one.

The verdict is particularly important in light of russia’s attempts at portraying the so-called “DPR” and “LPR” as independent insurgents and the 2014-2022 phase of russo-Ukrainian military conflict - as “civil war in Ukraine.”

More than 700 bodies found in the de-occupied regions, most are those of civilians — Ukraine’s Prosecutor General.

On November 19, Prosecutor General of Ukraine Andriy Kostin reported that over the last two months, more than 700 bodies had been discovered in the de-occupied territories of the Kharkiv, Kherson, and Donetsk regions; almost 90% of them were those of civilians. Additionally, Ukrainian law enforcement officers found more than 20 torture chambers where Ukrainian citizens had been illegally detained.

According to Energoatom, the nature of damage induced to the Zaporizhzhia Nuclear Power Plant as a result of the attack launched on November 20 indicates that the russian forces targeted the infrastructure objects required to re-launch power units No. 5 and 6, thus hindering the resumed production of electricity for the needs of Ukraine.

COSAC approves a proposal to set up a special criminal tribunal for russia.

On November 13-15, an LXVIII plenary meeting of the Conference of Parliamentary Committees for Union Affairs of Parliaments of the European Union (COSAC) took place in Czechia. Following the meeting, COSAC adopted a resolution that strongly condemns the unprovoked, unjustified, and illegal invasion of Ukraine by russia and calls for setting up an international tribunal to prosecute russia’s war crimes, as well as for establishing a mechanism to confiscate russia’s assets frozen by the EU.

Head of the Lithuanian Seimas delegation Marius Matijošaitis stressed that COSAC also unanimously endorsed Lithuania, Estonia, and Poland’s call for recognizing the russian regime as a terrorist one.

President Joe Biden’s administration is requesting additional financing to support Ukraine in its war with russia as part of a supplemental funding request. The figure includes $21.7 billion for defense purposes like equipment and military support, $14.5 billion in direct funding for the country’s government and humanitarian aid, $626 million in energy assistance, and $900 million for health care.

Czech Chamber of Deputies recognized the current russian regime as a terrorist one.

The lower house of the Parliament of the Czech Republic adopted a relevant resolution on November 16.

The Chamber of Deputies condemned russian attacks on the Ukrainian civilians and critical energy infrastructure, “which are an obvious attempt to achieve political goals through the intimidation of the civilian population and correspond to terrorist methods.” Additionally, MPs stressed that the shelling and deployment of military units in the area of the Zaporizhzhia Nuclear Power Plant (NPP) pose a threat that is not limited to the territory of Ukraine and reiterated that they did not recognize the results of the sham referendums held by russians in the Donetsk, Luhansk, Kherson, and Zaporizhzhia regions.

According to a statement published on the website of Riksdag, the Parliament of Sweden has decided to give the Government the authority to give defense material to Ukraine in 2022 “for a maximum value of SEK 3 007 800 000” ($284.6 million). The assistance would include “air defense systems, including qualified ammunition, armored vehicles, personal equipment including winter kits and body protection, gun-laying equipment, tents, and camouflage nets.”

"All 30 NATO countries supported the proposals of our delegation. Such a tribunal will allow convicting not only the direct perpetrators of war crimes but also the top leadership of the Russian Federation," wrote Mr. Chernev. The resolution will be further sent to the governments and parliaments of all NATO member states.

Draft laws In the first reading:

Laws in the second reading:

On November 14, the Program conducted a strategic session for the PRS to discuss its strategy, mission, values, and principles of the PRS. The participants discussed the services of the PRS. RANG will provide recommendations to improve the PRS Strategy based on the session.

USAID Rada: Next Generation Program launched cooperation with MPs to assist them in launching public discussions with stakeholders regarding the military's psychological treatment.

On November 16, RANG met with MPs, Halyna Vasylchenko and Natalia Pipa, both of the Holos faction. The meeting focused on the “peer-to-peer partnership of constituencies'' initiative implementation as well as support in interaction with stakeholders (MPs, VRU’s committees, local self-government, educational institutions, military, NGOs) to find solutions how to conduct an effective system of training of military psychologists to meet the needs of military personnel amid the war and the post-war period.

USAID Rada: Next Generation Program developed a model for VRU’s Committee on Social Policy and Protection of Veterans’ Rights, which will help in Ukraine’s legislation approximation with EU directives in the labor law area.

On November 16, the Program had a meeting with VRU’s Committee on Social Policy and Protection of Veterans’ Rights to discuss using the table of concordance in the Committee's work and additional EU directives to analyze. The Committee will integrate such processes into its standard operating procedures to improve its sustainability.

USAID Rada: Next Generation Program arranged the round table for the VRU’s Committee on the restoration and functioning of the energy and communal infrastructure amid hostilities.

On November 17-19, the Program facilitated the round table “On the restoration and functioning of the energy and communal infrastructure of settlements after the end of the active phase of hostilities'' in the framework of the Model Committee initiative to enhance Committee’s oversight capacities, as members of the Committees examined energy infrastructure facilities. The Program provided the Committee with the list of stakeholders to be invited for the discussion and supported the organization of the round table.

Alongside him, Head of the Parliamentary Education Center Olena Kostyniuk, Advisor to the Deputy Speaker of the VRU Pavlo Bulgak, and American Councils Project Coordinator Olena Kotsur are participating too.

The International Forum of Parliament Visitor Centers was founded in 2016 in order to foster professional cooperation and share knowledge and best practices among heads of visitor centers/services in parliaments around the world. The forum will be held under the theme “Towards a Post-Covid New Normal: Transforming Parliament into a Learning Space for Democracy”.

During the three-day program, the Knesset Visitor Center will provide participants with a unique overview of its tours, exhibits, and educational programs.

On December 1, RANG will organize the seminar "Parliament's defense of democratic institutions amid the war".

Registration is available via the link.